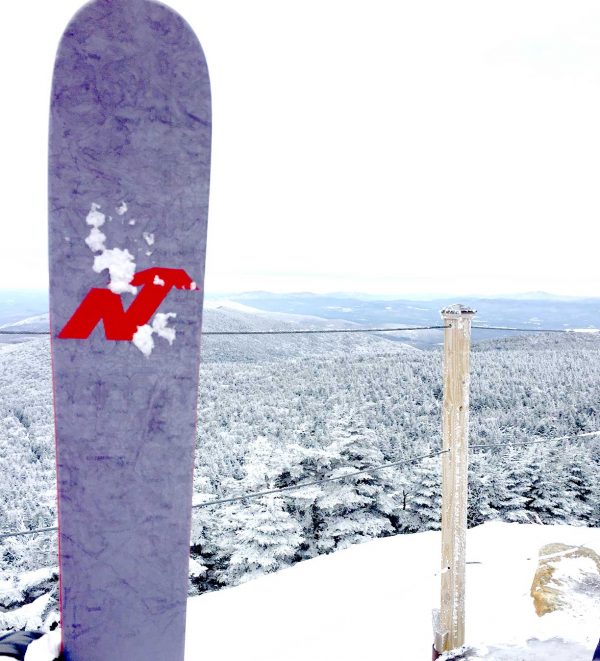 When does one really need new skis? Is it ever because they broke in half or just stopped working? Almost never. Yeah, they might be a few years old, they might not have the newest sweet graphics, but do we really NEED them?

To the average person, the answer to this question is almost always “no.” Do you see what passes for rental skis these days? They could very easily double as popsicle sticks.

But we’re a different breed. We are the Hardcores. Every year at SIA, companies roll out their gear for next year and we can do nothing buy salivate and figure out if we can justify the purchase to our significant others and go yet another year without a dishwasher, so that we can pick up some new gear (for the record, it’s been 3 years now).

Last weekend, I made that purchase, thus leaving us dishwasher-less for at least another few months.

I had been saving up during the year and put some money aside with intentions of picking up a new pair of skis in December during Ski Bum Week, but as we documented, the conditions sucked during one demo day, the other demo day got cancelled and the day I decided to demo a pair of skis I got the ol’ bait and switch, doubling the price on the skis (but a valuable lesson was learned, if you can, buy your skis on a rainy day – they’ll be much more willing to negotiate). One of those skis that I got to demo on that first, crappy condition demo day was a pair of Nordica Enforcers. These skis were written up by just everyone with universal praise – the pedigree as a race ski, widened and stuffed with metal creating the perfect single-quiver ski. Yeah, I know we’ve all heard that before, but in the two runs I took with them I got the feeling they were pretty special. The ski that I was comparing with them was the also brand new Armada Invictus 95Ti, which was a pretty fun ski in its own right.

A little bit of backstory, I was currently riding on a pair of Völkl RTM 80s that I bought at the end of the 2012-2013 ski season. They were a great pair of skis and exactly what I needed at that time. Then, I was skiing on a pair of really crappy Rossis that I bought at Sports Authority in 2009 that were in desperate need of replacement, for they sucked. When they were purchased, Sport Authority’s finest was about the level of gear that was appropriate.

The Völkls were very good to me. Back then, I was skiing roughly one weekend a month, usually at Mount Snow in VT and usually sticking to the groomers. I had demoed them before buying and had used their big brother, the RTM 84s on a trip to Whistler and really enjoyed them. Being the price conscious consumer, I opted for the more frugal 80s as well as them being the recommendation of the ski shop guy based on my size. Plus, they matched my gear and we all know how important that is.

Fast forward a few years and I’ve become a pretty decent skier. Instead of only going up one weekend per month, I’m going up almost weekly now. I’ve also started to ski on a lot more varied terrain – trees, moguls and even some terrain park features, so I was looking for less of a front-side ski but more of a freeride ski.

On top of that, I also had “fatty envy.” You know, when you see fat skis and you feel inadequate with your less girthy skis. The time had finally come to upgrade. I was thinking back to my experience with the Nordica Enforcer and was thinking those are probably the skis for me. I started to look online and they were sold out everywhere, of course. Would I just go with something else, of course not, this only made me want them more. I continued to do my research and found a post of pugski.com and saw that they were going to release the 2017 model at the end of January! The 100mm model would be almost identical, but there was going to be another, a 93mm! From all the reviews of folks who got their hands on prototypes, it sounds like these would be the skis for me. When I was in Telluride last year, I skied on K2 Rictors which were 90mm underfoot and had a great time with them. Like I said, I had “fatty-envy” and was originally looking to go with the 100s, but then I started to think about the terrain that I would normally be skiing, the Northeast, trees and lots of ice, so I ended up opting for the 93s.

For starters, the skis look cool. The design is simple, they’re a blueish-gray color with orangeish-red accents and logos. The design on the shovels of each ski are a topographical map of the Austrian Alps. Having skied in Ischgl, Austria last year I found that pretty sweet.

So you demoed these skis before you bought them, right?

There are two schools of thought as to why that is – first – I’m an idiot, second I knew what I was looking for and after demoing it’s big brother, I was positive they were what I wanted and I’m a goddamn man who doesn’t dick around. I know what I want and I go for it (you can talk to my ex-girlfriend, now wife, on what’s it’s like to be my prey…go ahead, I’ll wait). I’m going with the latter.

To be honest, I was little nervous about how my first run on these skis would go. Would I really like them? Would they be any different than my Volkls? Did I just piss away $940 of hard-earned money? All these thoughts vaporized after making my first few turns on these works-of-art.

The first thing I noticed was how much more tail these skis had. The Volkls I was coming from had an integrated binding system which since they were designed for front-side carving had a conservative mount with minimal excess tail length. For the new Nordicas I went with the suggested binding mount, but due to the skis construction it meant more tail length for turning and pivoting on moguls and trees. The next thing I noticed was just how easy weight transfer was on these skis. Going edge-to-edge is an absolute dream. On groomed terrain it feels like the skis are doing 80% of the work for you, knowing exactly where you want them to go. You can really tell that these are based on a slalom ski the way they react and carve.

Next was taking them into the park. Now, when I say into the park, I’m not talking about half-pipes, rails and actually partaking in the features, I’m talking about going over the jumps that are there to get you on the features. These skis are stiff, but as I mentioned earlier, they have the longer tails which makes absorbing impact on landings much more pleasant.

Moguls were also a blast with these skis. The longer tails worked really well in smacking into the exiting mogul and helping to pivot around to entry on the next one. It was here where having the slightly more narrow ski was welcomed. I’m not a very good mogul skier by anyone’s estimation, but having a little less underfoot helped me out and made it a bit easier to make my turns..

Unfortunately, I haven’t had a chance to ski much in the glades, save for one run on Squeeze Play. Now, SP is one of my favorite trails at Killington – it’s a long, really wide glade so you can have a different adventure every time you ski it. The one thing that really helps is having snow, which was very limited at the time. I think it was one of the first and only days it’s been open all season. I did one run and cringed as my new skis were getting knicked my various pieces of earth reaching through the snow, much like the undead skeleton arms in Army of Darkness. I don’t buy skis or cars to be garage queens, I buy them and use them for what they’re made for. If something breaks or gets messed up you get it fixed and do it again!

The only real negative is that they’re a pain in the ass to get your hands on. Where I purchased them they were already oversold based on the number of skis they received versus the number of reservations they had. I was willing to plunk money down without skiing them, so I was able to move to the front of the line and walk away with them. That’s what being a high falutin in all about.

I can’t recommend these skis more highly. They are great fun for all sorts of terrain and will make you feel like a better skier than you actually are.

Shopping Cart
There are no products in the cart!
Subtotal
$0.00
Total
$0.00
Cart
Checkout
Continue Shopping
0